This article by Nick Duxson was first published in The Wimmera Mail-Times on 29 of January 2014. Picture Paul Carracher. 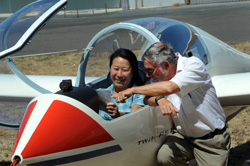 MORE than a dozen glider pilots are in training this week at the Horsham Flying Club ahead of next week's 48th annual Horsham Week Gliding Competition.

The Horsham club has again attracted pilots and instructors from across Victoria and interstate, ahead of the gliding week competition, which starts this Saturday at Horsham Aerodrome.

Horsham Flying Club committee member Michael Sudholz said this week was all about building up pilots' gliding skills and confidence.

"The aim of this course here is for pilots who have gone solo or got hours under their belt, to help them get cross-country," he said.

"You get out of your comfort zone, the instructors put you in another zone and say you can actually do this, and this is how you do it."

Sudholz said the Wimmera landscape provided a safe environment for pilots to hone their skills, and the club's training week had the support of the Victorian Soaring Association.

Victorian Soaring Association instructor Tim Shirley, from Benalla, said he hoped people would develop the skills to compete in next week's competition.

"The idea of having to make use of the air current and the thermals to fly means we can have a sport - attempting very long distances and racing them.

"In the competition next week, hopefully some of these people will continue on and compete with the rest of us."

Among the touring pilots is Melbourne woman June Murphy, a long-time gliding enthusiast who has been a regular visitor to Horsham over the past few years.

"This is maybe my seventh time, I've been coming here every year - for both weeks if I can afford it," she said.

"The thing I like about flying gliders is I get the feeling I'm part of nature, like I'm a kind of bird. I picked up hang-gliding in 1989 in Japan, and started gliding in Hawaii in 1996 and I just wanted to fly like a bird ever since I was little."

The training week finishes on January 31, ahead of the Horsham Week Gliding Competition from February 1-8.