This article was first published in The Wimmera Mail-Times newspaper on Feb 14, 2016.

DESPITE a non-flying day on Saturday, organisers have branded the 2016 Horsham Week Flying Contest a success. 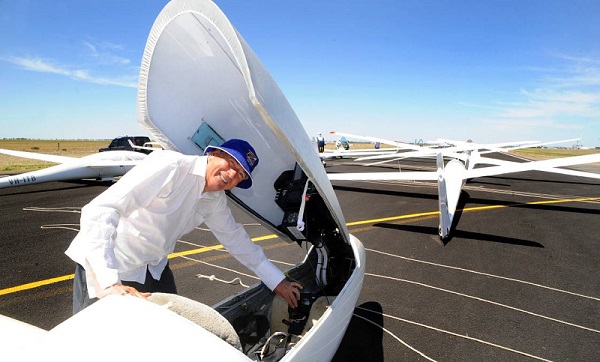 The event – hosted at Horsham Aerodrome for the past week – welcomed 39 gliders to the Wimmera for the competition that doubled as the Victorian State Gliding Championships.

Because of less than ideal weather conditions on Saturday, Friday served as the final day of flying, with the week’s winners crowned.[/dropcap]

“We classify this week as a very successful event. We had better numbers than we have had the previous two years.

“We flew five out of the eight days, which was good.

“We didn’t fly on Saturday because the air mass was too stable, so the day was cancelled, which meant the final day was Friday."

In the open class on Friday, Mark Patterson proved victorious with an average speed of 97.7 kilometres an hour, while Jack Hart, 82.8kmh, and Phillip Ritchie, 98.7kmh, won the standard 15-metre and club classes respectively.

Mr Niewand said it was a great effort for Ritchie to record faster speeds in his club class glider than those in the other classes.

“He actually came in quicker than the others, which isn’t common," he said.

In the overall Horsham and Victorian championship standings, it was Friday’s winning trio of Patterson, Hart and Ritchie who were victorious.

South Australia’s Patterson was crowned the Horsham Week Contest winner, as well as the state title winner, thanks to his win in the open class.

The standard and 15-metre class was split into two because of a wealth of competitors during the week.

Mr Niewand said while pilots were able to hit the skies on Friday, conditions still proved tricky for gliding.

“Friday was a bit of a struggle for pilots because it was an average day," he said.

“But it was okay. Mark did pretty well, winning on a couple of occasions throughout the week."

Gliders will now prepare for other state championships across Australia in 2016.

Mr Niewand said despite the success of its 50th anniversary competition, the Horsham Flying Club would meet and try to improve on the 2016 instalment of its event.

“There’s always a refining moment, and we’ll do a debrief at our next meeting," he said.

“We’ll pick up on a few things that we noticed and we can work on them to do a better job."