This article was first published in the Dimboola Courier newspaper on Feb 14, 2016. 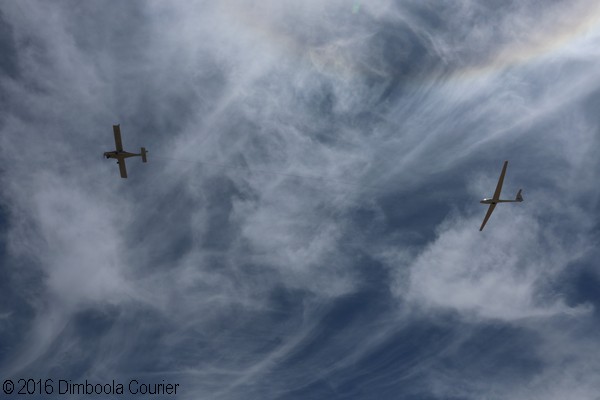 The 50th annual Horsham Week gliding competition, which also doubles as the Victorian State Championships, was held at the Horsham Aerodrome from the 6th to the 13th of February.

The week began with a dinner to celebrate the 50th Anniversary on the evening of Saturday 6th February which was well attended, including Horsham City Council Mayor Cr Heather Phillips and local member for Lowan Emma Kealy.

The competition is hosted by the Horsham Flying Club and is organised by a dedicated group of pilots from around Victoria attracted a total of 39 entries from Queensland, South Australia and across Victoria. Two of the pilots had flown in the inaugural Horsham Week in the mid-1960s indicating the appeal of the sport to all ages, with one of these pilots being only a teenager when he first competed and the other is still participating in his 80s.

Three different classes are contested; Club Class which includes the lowest class of glider, and Standard and Open which are for the highest performance craft. A handicapping system is also used which allows pilots of different abilities and levels of experience to compete equally. This makes this week an ideal introduction to competition for less experienced pilots.

Unsuitable conditions prevented any flying on Monday, Tuesday and the second Saturday, but warm weather contributed to good conditions on all other days of the competition.

On Friday a Free Distance Task, one which had not been flown for some years, was undertaken which involved pilots flying as far as they could in any direction of their own choosing as long as they could return to the Horsham aerodrome by the end of the three hours set for the task. Penalties were awarded for early or late returns.

In completing this particular task, pilots covered between 270 and 400 kilometres, depending upon the conditions at the time and fly at altitudes as high as 10,000 feet.

For each task the pilots are ranked on average speed, with a winner for each class awarded daily and an overall winner, based upon performances over all of the tasks, crowned at the end of the week.

A typical competition day begins with a light plane taking off and climbing to an altitude of around 6,000 feet to take temperature readings which along with the weather forecast for the day are used to determine the flight task that will be set.

This is revealed to the pilots at a briefing at 10am after which they prepare their aircraft to be ready to take off in the early afternoon. A task usually involves a flight of 200 to 350 kilometres which will take between three and four hours.

The launching of the gliders commences at 1pm and on this occasion the five available tow aircraft took just under an hour to launch the 39 gliders.

After launch the gliders circle a nearby landmark until the nominated start time. The pilots then complete the task which usually involves flying a predetermined route before returning and landing at the aerodrome.

In the past proof of completing the task would be in the form of photographs taken from the glider at the waypoints. This method required numerous photographs to be developed and analysed before the winners could be announced.

The aircraft are now fitted with GPS receivers which record location, altitude and speed, and upon returning to the ground this information is transferred to a computer and used to establish the finishing order.

The winner of the races is based on the fastest average speed to complete the task.

All pilots are required to sign back in upon their return in order for the organisers to establish if anyone has not made it back. Occasionally a glider is forced to land elsewhere and without an engine or a tow plane they are unable to take off again to continue their journey. In these circumstances a rescue crew and vehicle with a trailer is sent out to retrieve the pilot and glider. On each of Wednesday and Thursday this week five gliders suffered this fate.

Contest Director Ian Grant expressed the organisers’ appreciation for the understanding and co-operation from the farmers in whose paddocks these out landings have occurred.