This article was first published in the Weekly Advertiser newspaper on the 10th of February 2016.

Derrinallum’s Tony Tabart turned to gliding when he discovered his son was severely allergic to horses. 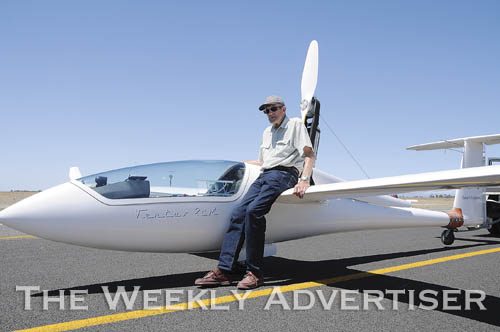 A keen equestrian competitor, Mr Tabart gave up show-jumping and cross-country events for a different kind of rush – taking to the skies in an unpowered aircraft made of fabric and wood.

His first foray into competitive gliding was at Horsham’s first event at Dooen in 1966.

Half a century later, Mr Tabart is still soaring over the Wimmera plains, enjoying the spectacular scenery of vast farmland complemented by mountain peaks.

Mr Tabart has competed in every one of them. “I’ve always enjoyed Horsham’s hospitality," he said. “Gliding was very big here in the 1980s and ‘90s and it’s always great to come back. “The Wimmera is perfect country for gliding."

Mr Tabart has enjoyed considerable success in the sport. He represented Australia at home and overseas, in France, Sweden, Italy, Austria and former Yugoslavia. He was the first Australian to win a day in an international competition, in Yugoslavia in 1972. He was also the oldest winner of the Australian Open Gliding Championship in 2004, has been Australian Open champion four times and set several gliding records – including being the second person in the world and first Australian to complete a 1000-kilometre triangle.

Mr Tabart learnt to fly with the Geelong club before establishing a small gliding club on his Kurweeton property, which was mostly used by neighbouring farmers.

These days he is a member of Horsham Flying Club.

The club hosted a 50th anniversary dinner on Saturday night following day one of this year’s competition.

President Arnold Niewand said the club was pleased with the turnout. “We had four pilots who competed at the first one – two of them, Tony Tabart and Haidyn Dunn are still flying," he said.

“We’re almost at our limit this year, with 38 gliders competing. “Sunday’s conditions were ideal and the outlook for the rest of the week is really good – which is lucky, because last week’s conditions were fairly ordinary. It’s all shaping up to be very promising."

The competition, which features three classes, finishes on Saturday. Mr Niewand said organisers set tasks for the pilots based on weather forecasts. Gliders use naturally occurring columns of rising air, or thermals, to stay airborne. Hot weather and minimal wind provide ideal conditions, which are often signified by the presence of cumulous clouds in the sky. The pilot who completes the task the fastest, taking in all specified turning points, wins.

Haidyn Dunn, who is originally from Victoria but is now based in gliding hotspot Waikerie in South Australia, said gliding was an exhilarating sport. Mr Dunn, who also competed in the first Horsham Week competition in 1966, said there had been significant advances in soaring in the past 50 years. “In the old days, the gliders were made of wood and fabric," he said.