This article by Colin MacGillivray was first published in The Wimmera Mail-Times on 15th of March 2013. Photo by Samantha Camarri. 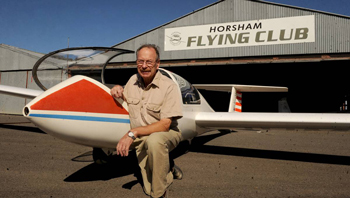 A LOT has changed over the last 50 years in the Horsham region.

Many sporting organisations have come and gone but one constant has remained the Horsham Flying Club.

The club which began in 1963 as the Wimmera Soaring Club will begin its 50th anniversary celebrations this weekend by commemorating the visit from the Sunraysia Gliding Club, which ultimately led to the founding of the Horsham club.

Members of the Sunraysia Gliding Club will attend a dinner tomorrow night to mark exactly 50 years since the day on which they conducted a gliding demonstration for interested Wimmera residents.

"It is a really big occasion for our club and it is nice to recognise that we have been operating in the Wimmera for 50 years," he said.

Mr Niewand said the club had seen many changes and improvements over the years, but had stayed true to the fun and sporting spirit it had been founded with.

"I think we have a lot to be proud of," he said. "For the past 46 years we have hosted the Horsham Week Gliding Competition continuously, which is the only competition in Australia which has run every year for that long we believe.

"We got the club to a level where it hosted the nationals competition back in 1997 when there were 72 gliders, so that was our biggest event."

Despite numbers declining since the early 2000s, a merger with the local light sport aircraft association and a name change, Niewand said he could not be more happy with where the club was currently at.

"We have an injection of new members who want to improve the facilities and renovate the club from their present level," he said.

"To have a group of people who are willing to put time in and renovate some of the older buildings and bring them up to modern day-standard is the highlight of the club I think."