This article by Colin MacGillivray was first published in The Wimmera Mail-Times on 11/02/2013. 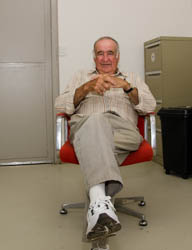 Keith Willis of the Bordertown-Keith Gliding Club set records in the World Class glider division during the competition, which finished on Saturday.

The FAI is the world governing body for air sports and aeronautics world records.

He has also previously held three FAI world records, including being the first person to fly a 500-kilometre triangle in a World Class glider.

He set the record during competition in Horsham.

Almost 40 Australian glider pilots competed in last week's competition, which is one of the largest in the country.

Willis said his two new records,  set on Wednesday, were an excellent way to cap off an enjoyable week of gliding at the Horsham Flying Club.

"The weather was sort of average, but that was a pretty good day," he said.

"It was the best day of the whole competition and it was good to take advantage of it."

Willis's record-setting gliding career has seen him compete in competitions in 18 different countries, including opportunities to represent Australia in the American national championships.

He said another highlight of his career was a trip to the former USSR during the communist era.

"I went across to Europe and different places and I was introduced everywhere as the first person to achieve 500 kilometres," he said.

Despite his extensive travels and impressive list of accolades, Willis said he still loved competing in Horsham.

He said he had not missed the Horsham competition in 43 years.

"I've seen all the developments and all the members come and go over the years," he said.

"I'm always the first one here and the last to leave.

"Each year I enjoy it better than ever."