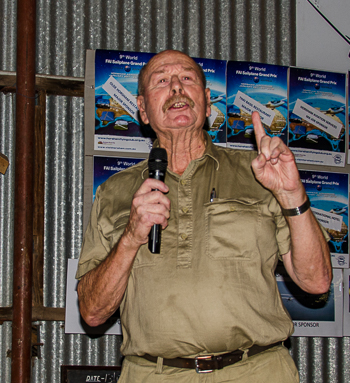 Max Hedt was a founding member of Wimmera Soaring Club in 1963 together with Tommy Thompson (Jeremy Thompson's father) and several others.  The Club's first glider, a Slingsby T31 tandem tutor, arrived later that year. Their first competition was at Dooen in the Easter of 1966.

Max had read a book called "8 Days at Angers" (France) and this gave the Club the idea to run an 8 day comp.  The best timing for conditions seemed to be early February, rather than Easter, and the first Horsham Week was held in 1967 at Dooen.  8 pilots competed including David Wilson (dedicated Horsham Week met-man who has competed nearly every year) in a Boomerang, Tony Tabart in his Bocian (Tony has competed in just about every Horsham Week) and Alan Patching.

In 1967, Wimmera Soaring Club received permission to locate at Horsham airfield and the hangar was moved.  The first flight out of Horsham was in October 1967.  The first Horsham Week at Horsham (the second Horsham Week) was in February 1968.

Comp #
Year
Recipient
Comments
56
2022
Graham Adams
55
2021
Not awarded
54
2020
Hamid Nazari
53
2019
Selwyn Ellis
52
2018
Neil Campbell
51
2017
Tony Carling
50
2016
Peter Champness
The Max Hedt trophy at the 50th Horsham Week and is was for the best performance in a wooden glider. In subsequent HW comps there were no entries of wooden gliders so it was decided to change the trophy criteria to award it to an individual who showed great promise, enthusiasm and a positive attitude.